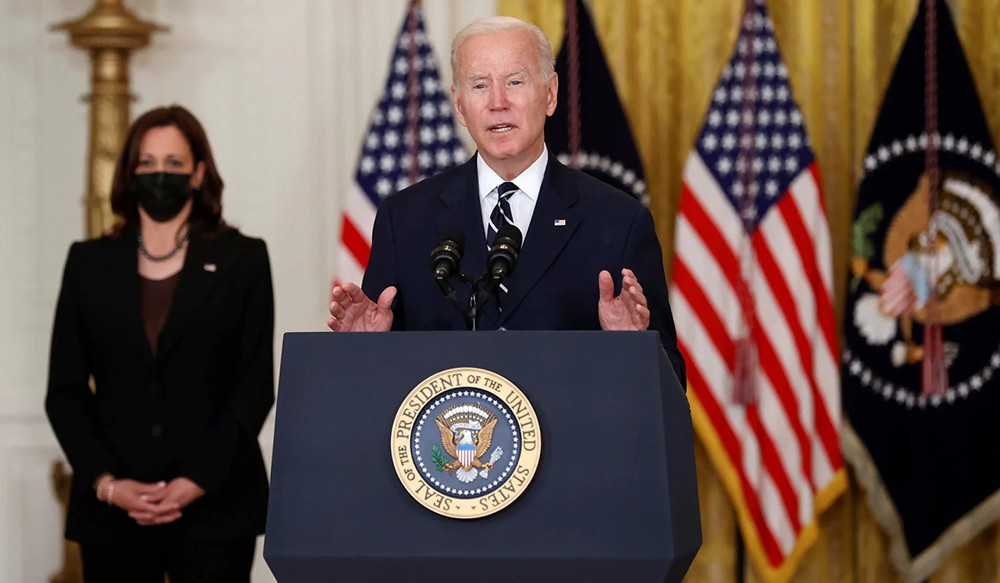 President Joe Biden delivers remarks about his Build Back Better agenda and the bipartisan infrastructure deal from the East Room of the White House in Washington, D.C., October 28, 2021. © Jonathan Ernst / Reuters

Last week, US President Joe Biden unveiled one of the largest infrastructure plans in U.S. history. The bipartisan approval targets up to $1.2 trillion in funding, including $550 billion in new investments for bridges, airports, the nation’s waterways and policies, transit, and more. Much of the bill targets electrification for infrastructure, buildings, and fleets of government vehicles. In addition to financing renewable energy, the infrastructure bill also provides $7.5 billion for electrification of public transport and an additional $7.5 billion for charging stations for electric vehicles (EVs), which is expected to drive demand for industrial metals and battery materials like copper, lithium, cobalt, nickel, and more. Companies mining these metals and materials like Wheaton Precious Metals (TSX:WPM) (NYSE:WPM), Hudbay Minerals (NYSE:HBM), Taseko Mines Ltd. (TSX:TKO) (NYSE:TGB), Copper Mountain Mining (TSX:CMMC), and Kutcho Copper (TSXV:KC) (OTCQX:KCCFF) could be on the precipice of a mining boom due to this bill.

Canadian resource developer Kutcho Copper (TSXV:KC) (OTCQX:KCCFF) just achieved a significant milestone at its Kutcho copper and zinc project in northern British Columbia, announcing the completion of its 2021 feasibility Study. After receiving positive project economics, Kutcho is now ready to move to the next phases on its path to production including the permitting process for the project.

Some of the highlights of the feasibility study include an after-tax Net Present Value (NPV) 7% of C$461 million, an Internal Rate of Return (IRR) of 25%, and low-cost production with all-in-sustaining costs (AISC) of US$1.80 per pound of copper equivalent (CuEq). The initial capital cost was also estimated to be low, at only C$493 million.

The study also confirmed that the project has a high-grade mineral resource of 8 million tonnes grading 2.26% CuEq 1.1 billion pounds CuEq, including 764 Mlbs Cu and 1,096 Mlbs Zn.

“The Feasibility Study represents a major milestone for Kutcho Copper as we continue to advance the high-grade Kutcho copper-zinc project towards a development decision,” said Kutcho Copper President and CEO Vince Sorace. “The results of the Feasibility Study highlight the attractive economics of the Kutcho project which are resilient at lower metal prices, very attractive at base case prices and exhibit significant leverage to rising prices as reflected in spot metal prices with a C$931 million after-tax NPV7% and a 41% IRR. We believe that the results of the Feasibility Study mean that Kutcho Copper is now one of the most undervalued copper investment opportunities in North America.”

Last month, Kutcho Copper also outlined potential open pit and underground resource expansion targets for 2022, beyond those contemplated in the feasibility study. Kutcho’s President and CEO commented, “We plan to advance a number of greenfields targets that show potential for the discovery of entirely new deposits that have not seen any exploration conducted since 1990.”

Kutcho Copper is evaluating plans to explore new priority targets in 2022 with the goal of enhancing the potential and size of its project. In conjunction with these efforts, Kutcho Copper will conduct an airborne geophysical VTEM survey over portions of the property that have not been covered by geophysical surveys in the past.

The company, which gained $100 million in financial backing from Wheaton Precious Metals (TSX:WPM) (NYSE:WPM), is fully dedicated to resource development to expand its high-grade Kutcho copper-zinc project in northern British Columbia. Kutcho Copper is committed to social responsibility and high environmental standards through the feasibility and permitting required for a positive constructive decision to advance its Kutcho Project, bringing it to production as soon as possible during this opportune moment for copper miners.

An Industry in a Maelstrom of Perfect Timing

Wheaton Precious Metals (TSX:WPM) (NYSE:WPM) recently declared its fourth-quarter cash dividend payment for 2021 of US$0.15 per common share, a 25% increase over the comparable period in 2020. The company reported its earnings for the first nine months of 2021, revealing over $200 million in operating cash flow during Q3 and a record $650 million in the first nine months of 2021.

Taseko Mines Ltd. (TSX:TKO) (NYSE:TGB) reported a significant increase in quarterly copper production. Taseko Mines announced that the Gibraltar mine produced 34.5 million pounds of copper and 600,000 pounds of molybdenum in the third quarter, representing increases of 29% and 50% respectively, compared to the second quarter.