A massive collaborative research project covered in the journal Nature this week offers projections to the year 2100 of future sea-level rise from all sources of land ice, offering the most complete projections created to date.

“This work synthesizes improvements over the last decade in climate models, ice sheet and glacier models, and estimates of future greenhouse gas emissions,” said Stephen Price, one of the Los Alamos scientists on the project. “More than 85 researchers from various disciplines, including our team at Los Alamos National Laboratory, produced sea-level rise projections based on the most recent computer models developed within the scientific community and updated scenarios of future greenhouse gas emissions,” said Price.

The estimates show that limiting global warming to 1.5 degrees C above pre-industrial temperatures would cut projected 21st-century sea-level rise from land ice in half, relative to currently pledged emissions reductions. For example, the paper notes that, when looking at all land ice sources, the median projection of cumulative rise in sea level by the year 2100 decreases from approximately 25 cm to approximately 13 cm when emissions are limited.

The term “land ice” includes mountain glaciers such as those in Alaska, Europe, high-mountain Asia, etc.; ice caps including those of Iceland and the Canadian Arctic; and ice sheets in Greenland and Antarctica.

Interestingly, Price points out, Antarctica continues to be the wild card. “Future changes to Antarctica remain highly uncertain,” he said. “Because of this, our high-end estimates for sea-level rise from land ice are more than twice as large as the ‘most likely’ estimate.” This is largely due to substantial uncertainty in how strongly warm ocean waters erode floating parts of the ice sheet from beneath.

Apart from that uncertainty, the bulk of the Antarctic sea-level rise projections do not show a strong sensitivity to different emissions scenarios, but a small number of projections result in an up to five-fold increase in sea-level contribution, Price said. Indeed, improving DOE’s ability to accurately simulate Southern Hemisphere climate and Antarctic ice sheet evolution has been a focus of Los Alamos efforts for more than a decade. 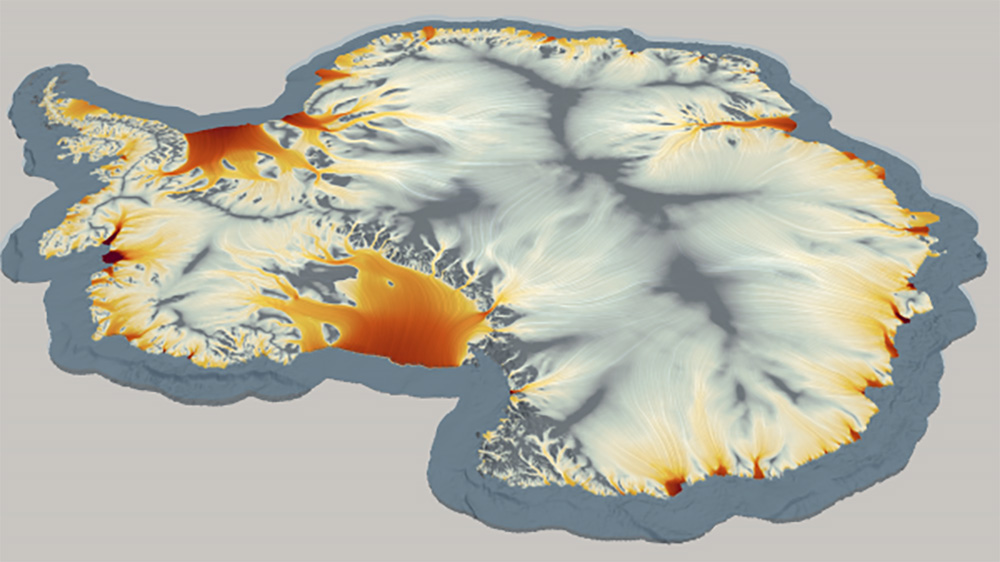 The Los Alamos role:
Los Alamos and the U.S. Department of Energy contributed at many stages of the newly published work, including:

Since 2013, Los Alamos has been the lead institution on the Cryosphere Science Campaign within DOE’s Energy Exascale Earth System Model (E3SM) project, which focuses on improving projections of Antarctic ice sheet evolution and sea level rise. Likewise, since 2010, Los Alamos has been the lead DOE institution on three DOE Office of Science funded projects around the development of “next generation” ice sheet models including ISICLES (2010-2012), PISCEES (2012-2017), and ProSPect (2017-2022). Los Alamos also currently leads or contributes to a number of ongoing efforts towards performing similar “end-to-end” analyses (climate change through future sea-level rise impacts) within a consistent, coupled Earth system modeling framework.

For this paper, Los Alamos’s simulations were done using a combination of the Grizzly and Badger supercomputers at the Lab, and NERSC (Cori-KNL) high-performance computing resources. Additional Los Alamos contributors to this work include Xylar Asay-Davis, Alice Barthel, Matthew Hoffman, and Tong Zhang.

The funding: Funding was provided by the DOE Office of Science, from the offices of Biological and Environmental Research (BER) and Advanced Scientific Computing Research (ASCR).