Front Page / Environment and Climate / Another Majestic Lion Was Killed in Zimbabwe, Allegedly by an American Hunter

A majestic lion named Mopane was allegedly killed by an American hunter outside of Hwange National Park in Zimbabwe last week. Mopane’s death has sparked international outcry with details surrounding his killing similar to those of Cecil the lion, slaughtered in 2015 in the same area. With his impressive mane, Mopane was well-known to local tour guides and international tourists visiting the area to catch a glimpse of him.

Just like 13-year-old Cecil who was lured with an elephant carcass as bait, it was reported that the approximately 12-year-old Mopane was possibly lured out of the Hwange National Park with bait and killed in the same place that Cecil was killed on land adjacent to the Park. Like Cecil who headed up a lion pride, Mopane was known to have formed a coalition with another male lion named Sidhule, and the two males formed a pride with two adult females and six sub-adults of about 16 to 18 months old. Locals were concerned that Sidhule and Mopane would be targeted by trophy hunters and started a petition to protect them. Unfortunately, Sidhule fell victim to a trophy hunter and was killed two years ago this month in 2019. 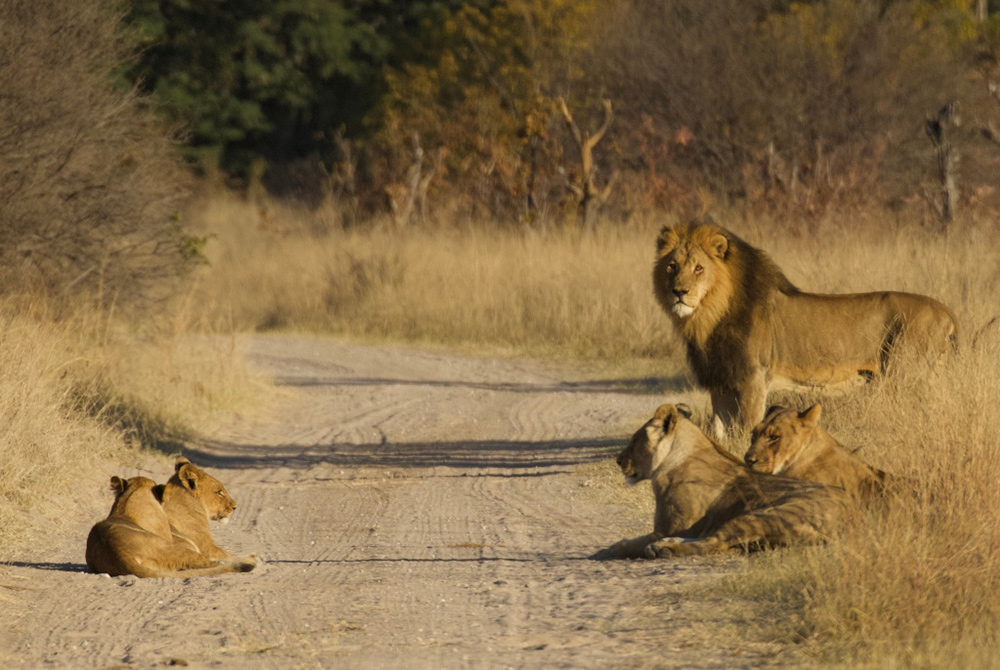 Mopane, the two lionesses of the Guvulava offshoot and two cubs belonging to the deceased Chiz Boys. © Africa Geographic

Kitty Block, president and CEO of the Humane Society of the United States and CEO of Humane Society International said, “Mopane was a father and played a significant role in his pride. Without him, his pride is now vulnerable to takeover by another male or group of males, which may lead to the killing of the cubs and females in his pride. Yet, as with Cecil six years ago, the perverse pleasure some people derive from killing iconic animals brought this noble lion’s life to a tragic end. Another trophy hunter spending tens of thousands of dollars on a globe-trotting thrill-to-kill escapade shows humanity at its worst. It is shameful that the U.S. has the distinction of being the world’s biggest importer of hunting trophies. Enough is enough.”

Sara Amundson, president of Humane Society Legislative Fund said, “The individual depravity that underlies trophy hunting is self-evident. But the terrible truth is that our federal government systematically enables trophy hunting of threatened and endangered species by Americans through its failure to revise import policies that permit the bloodshed to continue. On the campaign trail, President Biden expressed his concern for this issue and he can and should now direct the relevant federal agencies to halt the import of trophy parts from species listed under the Endangered Species Act. Until we have a properly implemented regulatory framework that upholds the conservation mandate in federal law, this is little more than lawless carnage.”

The African lion is protected under the U.S. Endangered Species Act. However, trophy hunters continue to be authorized by the U.S. Fish and Wildlife Service to import trophy-hunted lions and other species threatened with extinction under a permitting scheme that HSUS and HSI have challenged as violating federal law. The Humane Society Legislative Fund is currently working with the Administration and Congress to address this dangerous and broken import permit system.