Streetwear brand AKINGS launched a pop-up runway interactive experience in their Midtown Showroom. The New York Fashion Week experience included customers, celebrities, and influencers who showed up to shop the new collection and participate in recording their first-ever virtual runway walk styled in their new collection. The designer Alan King enlisted the help of Celebrity stylist Vic Allen Jr (clients include Lil Baby & Wale), legendary photographer Kenneth Dapaah (most known for his Pop Smoke Album Cover), and Carku Media LLC to deliver the most NYFW talked about experience ever. 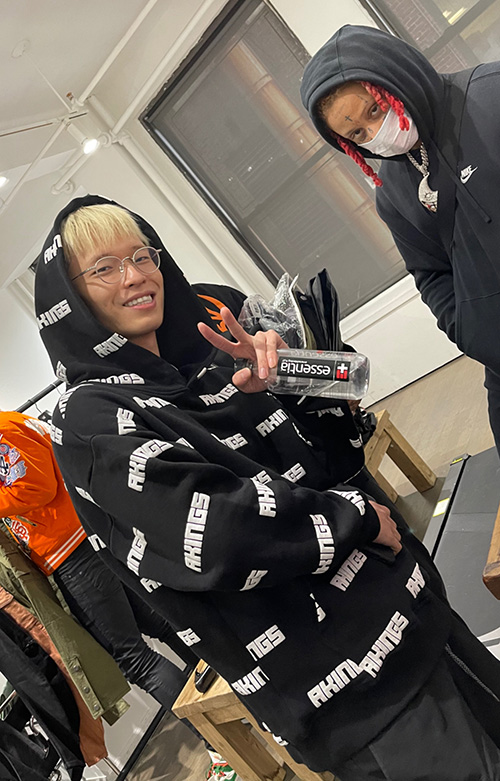 The event is a sequel to the brand’s earlier model casting campaign that debuted in January and went viral on social media platforms like Tik-Tok and Instagram.

Founder and Creative Director, Alan King, was present at the pop-up show and interacted with all guests including influencers and celebrities that were invited during exclusive VIP hours. Some of which included the likes of artists such as Trippie Redd, Chicklet, and Maleni who all took the time to shop the brand’s new collection.

“Social media is our runway. It’s where we reach our people and bring together customers and friends in our community together to do a virtual runway right here in our NYC showroom. I believe that it’s only right for a brand like ours, built through social media, to open up our modeling opportunities to our community.”, says King on his recent New York Fashion Week pop-up success. “The concept behind our runway campaign was inspired by the different faces of our customer community. These people have supported us and taken us this far, so I wanted to create an environment and concept where we could include as much of our community as possible. This is a continuation of the brand’s belief in inclusivity beyond the measurements and the fit on our stacked jeans. It feels great to have the same people who have supported us throughout these years represent us as we introduce our new Fall/Winter Collection”.

Inspired by the idea of bringing the runway to the streets, AKINGS launched the 4-day event on Friday, September 10th, at their 214 West 39th street showroom. RSVP appointments went up on Wednesday to their customers and later on to the public. With the brand’s recent success on their social media platforms, it was no surprise that models booked their flights from all over the country to participate in their New York Fashion Week runway experience.

Models lined up at the entrance of their showroom and were greeted by the AKINGS New York team who brought the best out of each model through conversations surrounding style and excitement to walk the runway in the new AKINGS collection. Each model took the opportunity to walk the runway in outfits carefully selected by one of the hottest celebrity stylists in the game Vic Allen Jr known for his work with artists such Lil Baby and Wale. After being styled in fits curated by the stylists each model was taken to a self-moving floor that allowed models to walk in place and be videotaped and photographed while they were directed into different poses and movements.

At the end of the runway models were able to shop the new capsule Anarchy collection, a curated lineup of items Alan King wore on his recent television debut on the HBO Max series, “The Hype”. From their stacked jeans to their new collection of tee shirts, models left with pieces from the new collection to remember their first NYFW runway walk. You can shop the new collection on their website akings.com.  Watch the full runway on their YouTube here.  All photos were shot by Kenneth Dapaah. 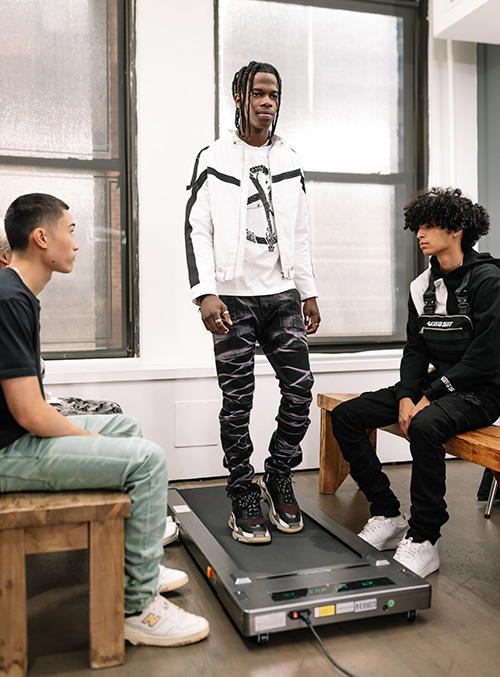 About AKINGS
A New York streetwear brand carrying out an inclusive fit for all heights through their stacked jean silhouette. Initially launched in 2017 in New York City by founder and present-day creative director, Alan King, with a 200 dollar self-investment towards the first sample of his signature J-shape jeans. After taking the first images of his jeans public on social media, they were picked up and shared on Reddit where users rushed to pre-order and help fund the brand’s first pairs of jeans. With their first production funded, the brand continued to captivate new audiences and while at the same time witnessing some of the biggest hip-hop stars (Lil Baby, Wale, Trippie Redd, Steve Aoki and Tyga) in the game wear their stacked jeans to their biggest performances and music videos. While the brand continues to capture new domestic and international audiences they continue to be featured on publications such as Vogue, GQ, Forbes, Esquire, WWD, and many more.

About the Designer Alan King
Starting with just $200 in high school from a part-time job the designer first began in screen-printed tees and hoodies while reselling hyped brands like supreme, bape and yeezys to fund his love for streetwear. King moved into denim because he saw a need for an aesthetic that he could not find on the market. “I started making clothing at first honestly because I was just tired of wearing hand-me-downs and not finding clothes I really liked. Even when I was buying designer clothes I felt there was something I would tweak to a garment to make it fit me more. It was this feeling that drove me to design my own garments.”

Shop the full collection of their stacked jeans here.