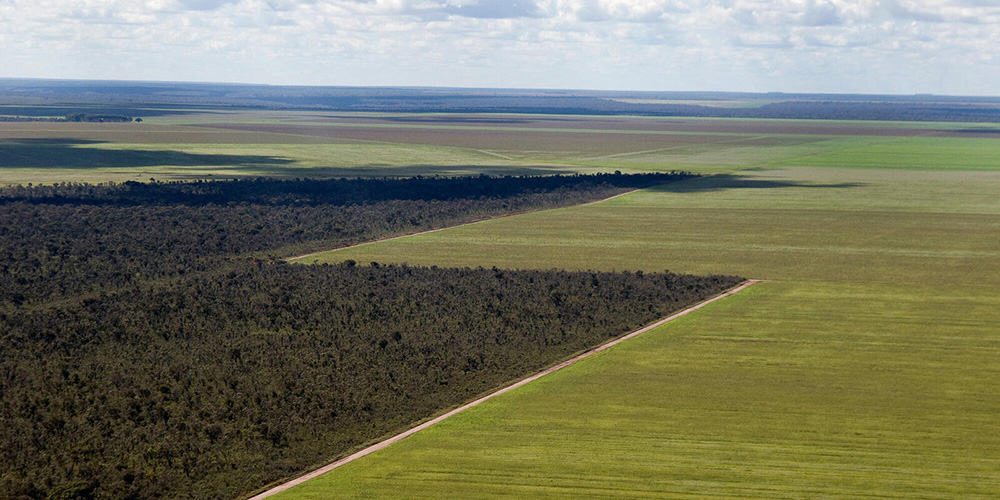 A new study published in leading journal, Science, finds that between 90 and 99 percent of all deforestation in the tropics is driven directly or indirectly by agriculture. Yet only half to two-thirds of this results in the expansion of active agricultural production on the deforested land.

The study is a collaboration between many of the world’s leading deforestation experts and provides a new synthesis of the complex connections between deforestation and agriculture, and what this means for current efforts to drive down forest loss.
Following a review of the best available data, the new study shows that the amount of tropical deforestation driven by agriculture is higher than 80 percent, the most commonly cited number for the past decade.

This comes at a crucial time following the Glasgow Declaration on Forests at COP26 and ahead of the Biodiversity Conference (COP15) later this year and can help ensure that urgent efforts to tackle deforestation are guided and evaluated by an evidence base fit for purpose.

“Our review makes clear that between 90 and 99 percent of all deforestation in the tropics is driven directly or indirectly by agriculture. But what surprised us was that a comparatively smaller share of the deforestation – between 45 and 65 percent – results in the expansion of actual agricultural production on the deforested land. This finding is of profound importance for designing effective measures to reduce deforestation and promote sustainable rural development”, says Florence Pendrill, lead author of the study at Chalmers University of Technology, Sweden.

The fact that agriculture is the main driver of tropical deforestation is not new. However, previous estimates of how much forest has been converted to agricultural land across the tropics varied widely – from 4.3 to 9.6 million hectares per year between 2011 and 2015. The study’s findings narrow down this range to 6.4 to 8.8 million hectares per year and helps explain the uncertainty in the numbers.

“A big piece of the puzzle is just how much deforestation is ‘for nothing,’” observed Prof. Patrick Meyfroidt from UCLouvain and F.R.S.-FNRS in Belgium.

“While agriculture is the ultimate driver, forests and other ecosystems are often cleared for land speculation that never materialized, projects that were abandoned or ill-conceived, land that proved unsuitable for cultivation, as well as due to fires that spread into forests neighboring cleared areas”.

Understanding the significance of these drivers is key for policymakers – whether in consumer markets such as the European Union’s recently proposed due diligence legislation for “deforestation-free products,” private sector initiatives for specific commodities, or for rural development policy in producer countries.

The study makes clear that a handful of commodities are responsible for the majority of deforestation linked to actively producing agricultural land – well over half of which is linked to pasture, soy and palm oil alone. But it also calls out the shortcomings of sector-specific initiatives that are limited in their ability to deal with indirect impacts.

“But as our study shows, strengthening forest and land-use governance in producer countries has to be the ultimate goal of any policy response. Supply chain and demand-side measures must be designed in a way that also tackles the underlying and indirect ways in which agriculture is linked to deforestation. They need to drive improvements in sustainable rural development. Otherwise, we can expect to see deforestation rates remaining stubbornly high in many places,” Dr. Gardner added.

The study’s findings point to the need for supply chain interventions to go beyond a focus on specific commodities and risk management, to help drive genuine partnerships between producer and consumer markets and governments.

This needs to include strong incentive-based measures that make sustainable agriculture economically attractive, while disincentivizing further conversion of native vegetation and supporting the most vulnerable smallholder farmers.

The authors say this should include a stronger focus on domestic markets, often the biggest drivers of demand for many commodities, including beef, and a strengthening of partnerships between companies, governments and civil society in producer jurisdictions.

Finally, the study highlights three critical gaps where a stronger evidence base is needed to better target efforts to reduce deforestation;

“The first is that without a globally and temporally consistent data product on deforestation, we cannot be confident about overall trends in conversion. The second is that except for oil palm and soy, we lack data on the coverage and expansion of specific commodities to know which are more important, with our understanding of global pasture and grazing lands being especially dire. The third is that we know comparatively very little indeed about tropical dry forests, and forests in Africa”, said Professor Martin Persson of Chalmers University of Technology.

“What is most worrying, given the urgency of the crisis”, added Prof. Persson,“is that each of these evidence gaps pose significant barriers to our ability to drive down deforestation in the most effective way – by knowing where the problems are concentrated, and understanding the success of efforts to date”.

Despite these knowledge gaps and remaining uncertainties, the study stresses that a step-change in efforts is urgently needed to effectively tackle and curb deforestation and the conversion of other ecosystems and foster sustainable rural development.

The Glasgow Declaration on Forests recognized the importance of jointly addressing the crises of climate and biodiversity loss and set a new level of ambition for tackling deforestation and promoting sustainable agriculture. The authors of this new study say it is paramount that we begin to see individual countries and policymakers prioritize the realization of this ambition.