More than a quarter (25.7%) of single-family homes for sale in America during the first quarter were new-construction homes, according to a new report from Redfin, the technology-powered real estate brokerage. That’s up from 20.4% a year earlier and represents the highest share on record.

New-construction homes have steadily been taking up a larger piece of the pie over the last decade, but there has been a notable acceleration during the coronavirus pandemic. There are two primary reasons, according to Redfin Lead Economist Taylor Marr: an increase in homebuilding and a decrease in the number of Americans putting their houses up for sale.

“Building homes has become more attractive and profitable during the pandemic due to record-low mortgage rates and red-hot homebuyer demand,” Marr said. “At the same time, many homeowners have opted to stay put and refinance or remodel their existing homes instead of selling them, allowing new-construction homes to take up a larger portion of the market.”

A lot of pandemic homebuyers have also turned to the new-construction market because bidding wars are fierce and new homes have historically attracted less competition. But the U.S. housing shortage has grown so severe that some newly built homes now have waitlists that are 90 buyers deep, said Redfin’s Salt Lake City Market Manager, Ryan Aycock. Some builders are even canceling contracts with buyers who refuse to accept price increases.

“New construction has typically been a good option for buyers who don’t want to deal with bidding wars because builders don’t usually set deadlines for offers. Buyers also like that they can often buy a new home for what it’s actually listed for rather than having to offer way over the asking price to win,” said Redfin Houston real estate agent Melanie Miller. “However, inventory for new construction is very low and prices are now rising for many new and pre-construction homes because lumber prices have gone up. I had one buyer who came to terms with a builder at a certain price. The builder called us the next day and said they can’t do that price anymore because their suppliers just increased prices.” 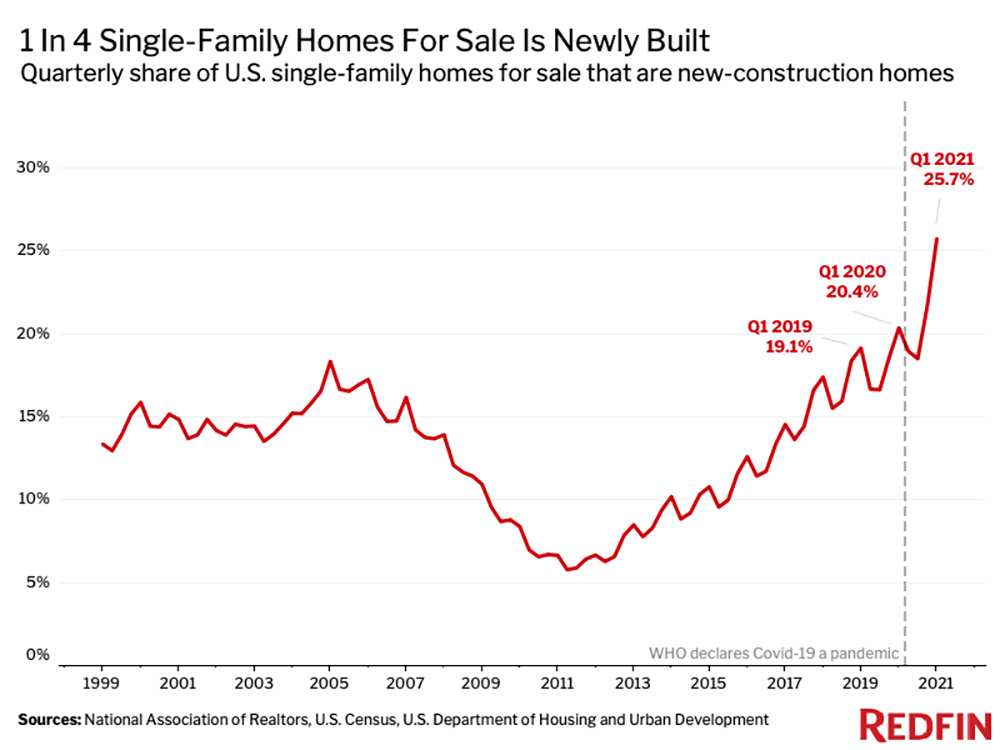 California metros fill the bottom of the list in part because they tend to have less vacant land available and less space zoned for housing development, Marr said. When broken down by region, the West had the lowest share of newly built homes as a portion of total single-family homes for sale, at just 8.4%. It was followed by the Northeast (11.4%), the Midwest (15.4%) and the South (25.8%).

Certain major metros are excluded from Redfin’s analysis because its methodology filters out metros where there were fewer than 50 sales of newly built single-family homes in the first quarter. San Francisco and Philadelphia are among the metros excluded for this reason.

Looking Ahead: Building Permits Are Up the Most In Elgin, IL and Tacoma, WA
Single-family building permits, or government-granted authorizations that allow builders to begin construction of single-family homes, jumped 25.7% year over year during the first quarter.

Metros must have had populations of at least 750,000 and at least 50 sales of newly built single-family homes during the first quarter of 2021 to be included in the table below.