Today, TIME names Joe Biden and Kamala Harris, President-elect and Vice President–elect of the United States, as the 2020 Person of the Year.

TIME Editor-in-Chief and CEO Edward Felsenthal writes, “For changing the American story, for showing that the forces of empathy are greater than the furies of division, for sharing a vision of healing in a grieving world, Joe Biden and Kamala Harris are TIME’s 2020 Person of the Year”

Felsenthal continues, “Joe Biden was elected President of the United States in the midst of an existential debate over what reality we inhabit. Perhaps the only thing Americans agree on right now is that the future of the country is at stake, even as they fiercely disagree about why…. The task before the new Administration is immense: a pandemic to confront, an economy to fix, a climate crisis to tackle, alliances to rebuild, deep skepticism to overcome with many Americans dubious about unity with Trump voters, and an opposition party still very much under Trump’s sway…. This will be the test of the next four years: Americans who haven’t been this divided in more than a century elected two leaders who have bet their success on finding common ground.”

Kamala Harris is the first Vice President to be included in the choice for Person of the Year. Felsenthal writes: “TIME from its beginnings has had a special connection to the presidency, as a reflection of America and its role in the world. Every elected President since FDR has at some point during his term been a Person of the Year, nearly a dozen of those in a presidential election year. This is the first time we have included a Vice President. In a year that saw an epic struggle for racial justice, and one of the most consequential elections in history, the Biden-Harris partnership sends a powerful message.”

In his letter to readers, Felsenthal writes, “The selection of Person of the Year is rarely easy, and this year was far more difficult than most… In Joe Biden and Kamala Harris, we have two individuals whose election mirrored and moved the major stories of this year and whose fates will shape the nation’s role in the world and the future of the American experiment.”

In the cover story, TIME’s Charlotte Alter writes, “Biden had the vision, set the tone and topped the ticket. But he also recognized what he could not offer, what a 78-year-old white man could never provide: a bridge to the future. For that, he needed Kamala Harris: California Senator, former district attorney and state attorney general, a biracial child of immigrants whose charisma and tough questioning of Trump Administration officials electrified millions of Democrats. The Vice President has never before been a woman, or Black, or Asian American.… Together, they offered restoration and renewal in a single ticket. And America bought what they were selling: after the highest turnout in a century, they racked up 81 million votes and counting, the most in presidential history, topping Trump by some 7 million votes and flipping five battleground states.”

On Biden and Harris’ challenge, Alter continues, “Defeating the Minotaur was one thing; finding the way out of the labyrinth is another. A dark winter has descended, and there will be no rest for the victors…. Given the scale and array of America’s problems, the question may not be whether this team can solve them but whether anyone could.…. Their challenge is, above all, not about any one policy, proposal or piece of legislation. It is convincing America that a future exists, for all of us, together. It is nothing less than reconciling America with itself.” 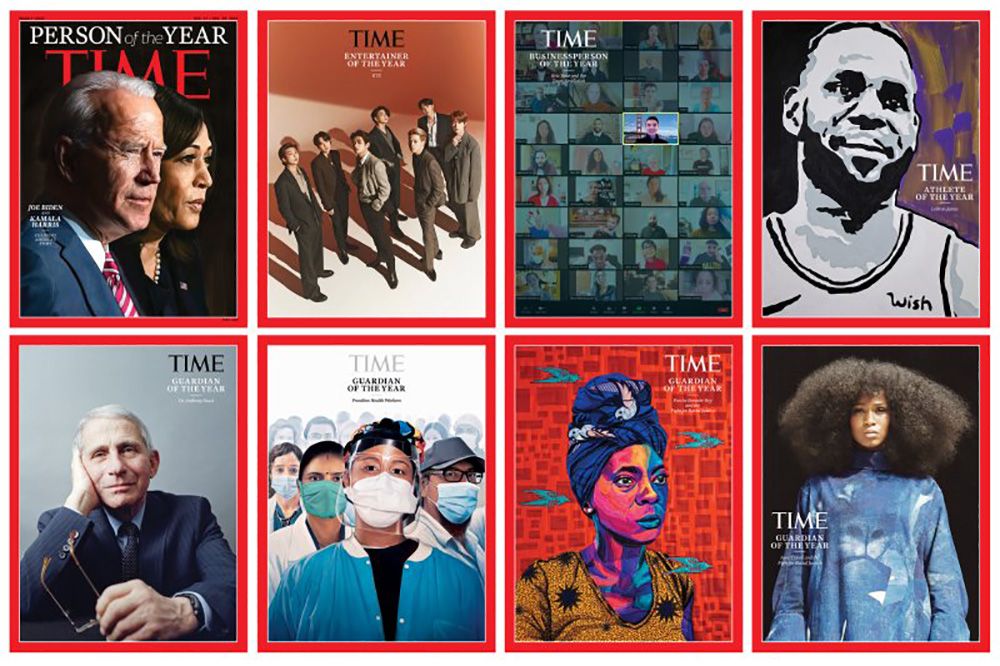 PLUS – TIME Names the 2020 Athlete, Businessperson, Entertainer, and Guardians of the Year:

ATHLETE OF THE YEAR
LeBron James

BUSINESSPERSON OF THE YEAR
Eric Yuan and the Zoom Revolution

ENTERTAINER OF THE YEAR
BTS

The December 21, 2020 Person of the Year issue of TIME goes on sale on Wednesday, December 16.