100 Black Men of Atlanta, Inc., a non-profit organization, is deeply saddened to learn of the passing of baseball legend and beloved member of the organization, Hank Aaron, at 86.

“A legend has fallen. Mr. Aaron was the true embodiment of the strength, perseverance, and resilience of African Americans across this nation,” said Kevin Gooch, chairman of the 100 Black Men of Atlanta. “He became a national hero by fighting through unparalleled hatred and adversity to ascend to the top of the mountain of ‘America’s Pastime’ with 755 home runs.” 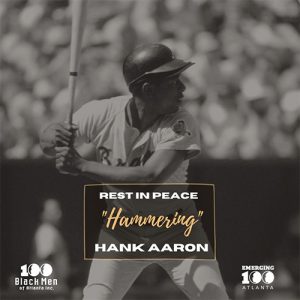 Aaron was a beloved legacy member of the 100 Black Men of Atlanta since 1995. His contributions to the organization helped improved the lives of thousands of young people throughout the Atlanta metro area.

Chairman Gooch continued, “Mr. Aaron’s lasting impact, which was made alongside his loving wife, Billye, was his unrelenting service and dedication to his community by supporting college scholarships for vulnerable young people, creating economic opportunities through his many business ventures and many, many other community endeavors.”

Henry “Hammerin’ Hank” Aaron was born in Mobile, Alabama, on February 5, 1934. Aaron was one of eight children to his parents Herbert and Estella Aaron.

In 1951, Aaron began his historic baseball career as a shortstop for the Indianapolis Clowns in the segregated negro leagues. A few seasons later, Aaron was signed as a left fielder for the Milwaukee Braves which later moved to his long-time home of Atlanta in 1966.

Aaron was best known for passing Babe Ruth’s all-time homerun record on April 8, 1974 and set a new one at 755; a record that lasted decades after his retiring.

“He will be sorely missed by all that knew him and knew of his legend. May the Lord rest his soul. Job well done,” stated chairman Gooch.